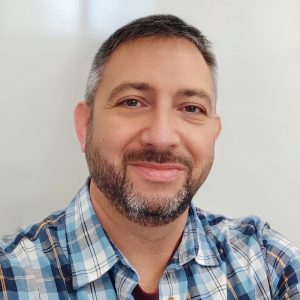 Where are you from?
I’m from a city called Chester, which is in the North West of England, but have lived in Spain since 2001.

What’s your favourite music?
Alternative rock and rap mainly from the 90’s.

What’s your favourite book?
My favourite book is ‘The Secret History’ by Donna Tartt. I read it at university and lent it to a friend at the end of the first year. When I went to ask for it a few weeks later, apparently four people had read it one after the other!

What do you miss most about your home?
Apart from family and friends I miss my city and hearing people speaking with an accent from the north of England.

What sports do you like?
I used to enjoy playing squash and badminton when I lived in the UK, and have played some padel here in Spain.

What do you like about living in Pamplona?
I haven’t lived in Pamplona for very long but everyone I’ve met seems very friendly and polite, and the city is very clean.

What was your favourite film when you were a kid?
Probably ‘Star Wars’. When I was little I had a friend who had it on video, and I used to ask to watch it every time I went to her house. She wanted to watch ‘Grease’, but I always won!

This website uses cookies to improve your experience while you navigate through the website. Out of these, the cookies that are categorized as necessary are stored on your browser as they are essential for the working of basic functionalities of the website. We also use third-party cookies that help us analyze and understand how you use this website. These cookies will be stored in your browser only with your consent. You also have the option to opt-out of these cookies. But opting out of some of these cookies may affect your browsing experience.
Necessary Always Enabled
Necessary cookies are absolutely essential for the website to function properly. This category only includes cookies that ensures basic functionalities and security features of the website. These cookies do not store any personal information.
Non-necessary
Any cookies that may not be particularly necessary for the website to function and is used specifically to collect user personal data via analytics, ads, other embedded contents are termed as non-necessary cookies. It is mandatory to procure user consent prior to running these cookies on your website.
SAVE & ACCEPT